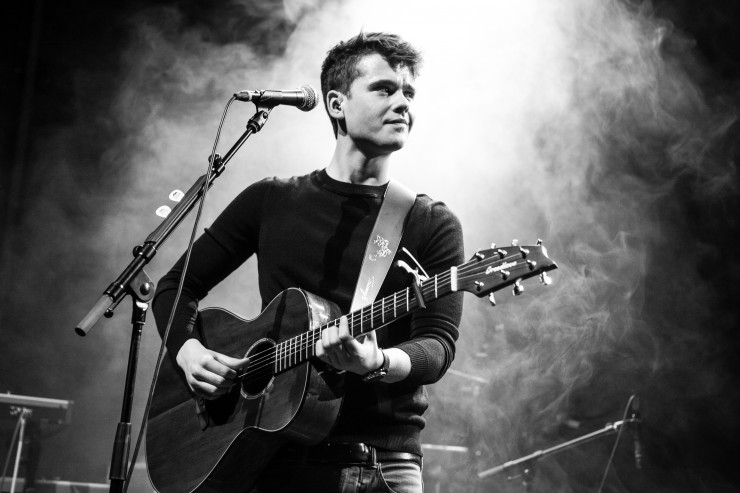 Via an initiative of the Dutch Blues Foundation, blues guitarist Guy Smeets (20 years old) has been invited to attend the prestigious youth workshop held in Clarksdale, Mississipi by the Pinetop Perkins Foundation. Guy will be the first European guitarist to attend this event. The workshop will take place from June 12-15, 2018, and offer guitar, piano, harmonica and drum workshops under the direction of veteran bluesman and musical director Bob Margolin.

Without a doubt, Guy Smeets is considered Holland's hottest young star on guitar. At the age of seven, he was given his first acoustic guitar and he began music lessons. Within 2 years he began playing live. Now at age 20 he plays a sensitive, energetic and charismatic appearance combined with virtuoso technique. According to Karen Neumann chairman of the Dutch Blues Foundation "Guy Smeets has achieved so much at a young age, and we have watched him grow and mature as an artist. He is a super talent and we are very excited to be able to give him this opportunity." In 2016 Smeets made a huge impression on the European Blues world when his solos stole the show that the European Blues Challenge in Toritta di Siena, Italy. He has been nominated for three Dutch Blues Awards (2014, 2015). Currently, he plays in the bands AJ Plug and Colonel Jetski traveling the Netherlands and Europe. He also recently completed a tour with Ben Poole.

The Dutch Blues Foundation working in conjunction with The Pinetop Perkins Foundation, The European Blues Union and Nationale Nederlanden all provided scholarships to cover the travel, accommodation and workshop attendance. The former President of the Blues Foundation in Memphis, Jay Sieleman also has arranged for Guy to be hosted during the first part of his trip to Clarksdale by veteran bluesman Mississippi Mick (Mick Kolassa).

The goal of this workshop states Foundation president Pat Morgan, "is to grow provide an opportunity for up and coming young musicians to be mentored by top blues musicians and cultivate the musicians of tomorrow". Held on the grounds of the historic Hopson Plantation and the Shack Up Inn, the workshops cover two and a half days of instruction capped by a performance Friday evening at Ground Zero Blues Club owned by Morgan Freeman and Bill Luckett. According to Luckett, who also serves on the board of the Pinetop Perkins Foundation, says "the mission of Pinetop Perkins Foundation fits into the area because keeping the blues alive is also a major part of the overall effort of Ground Zero Blues Club and the people of Clarksdale, Mississippi."

Both the piano and guitar workshops are geared for advanced players. The piano workshops will focus on blues forms and blues elements including blues rhythms, introductions, turnarounds, left-hand grooves, among other "various licks and tricks."

The title for Bob Margolin's workshop on the other hand, is Finding Deep Blues Guitar and aims to personalize the experience sharing technique, attitude, as well as exploring the art of listening and helping to perfect performance skills.  Margolin says his aim is to "pursue blues that sounds and feels good, works with other players, thrills an audience, and is both fun and deeply fulfilling."

"It is especially fitting that these workshops are held at the Hopson Plantation and the Shack Up Inn," states Roger Stolle, a 2008 recipient of The Blues Foundation's Keeping the Blues Alive award and owner of the esteemed Cat Head Delta Blues & Folk Art in Clarksdale. Stolle adds "the same rich Delta blues environment that brought the world such iconic blues figures as John Lee Hooker, Muddy Waters and Pinetop Perkins would also play a part in the blues genre's future. By bringing together experienced blues musicians with enthusiastic students the Pinetop Perkins Foundation and Clarksdale offers a truly unique and unforgettable learning pilgrimage to the land of the crossroads."

Formed in 2009, the Pinetop Perkins Foundation is non-profit organization whose mission is to provide encouragement and support for youth and young people at the beginning of their musical career; and help provide care and safety for elderly musicians at the twilight of their career. Fulfilling the first part of their mission, the Foundation plans to offer an annual Youth Workshop Series to bring world-renowned blues artists for instruction and mentoring to young musicians. On February 24, 2011, Pinetop Perkins will receive the Mississippi Governor's Award for Excellence in the Arts.